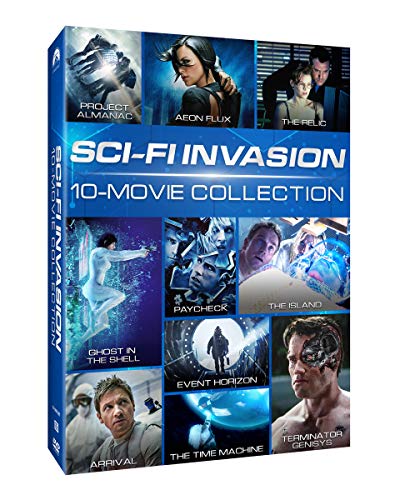 An invasion of 10 Sci-Fi favorites in this action-packed collection including Terminator: Genisys, Aeon Flux, Ghost in the Shell, Arrival, Project Almanac, Echelon, Conspiracy, Event Horizon, The Island, The Relic, and The Time Machine

From producer Michael Bay (Teenage Mutant Ninja Turtles, Transformers) comes the action-packed thrill ride starring Jonny Weston (Divergent Series: Insurgent). When a brilliant high school student and his friends discover blueprints for a machine that can send them back in time, the possibilities seem endless. They rewrite history to win the lottery, ace exams, and party like there’s no tomorrow. But by changing the past, they have threatened the future of our world. Can they undo the damage they have unleashed before it’s too late?

Academy Award-winner Charlize Theron stars as Aeon Flux, the underground operative fighting totalitarian rule in the 25th-century Earth’s last living city. Aeon is the rebels’ best hope of overthrowing the oppressively sterile, “perfect” society. But while on assignment to gun down the government’s leader, Aeon uncovers a web of startling secrets that could completely change the world’s future in the gripping sci-fi action thriller based on the ground breaking MTV animated series.

Come in—if you dare. The opening-night gala for a new exhibit at Chicago’s natural history museum is under way. But be advised: something terrifying wants to make sure no one ever leaves. Penelope Ann Miller, Tom Sizemore, Linda Hunt and James Whitmore star in this effects-packed shocker that gives haunted-house movies a terrific new setting. And the non-human star (brought to head-ripping life by Jurassic Park Oscar winner Stan Winston) is something no creature fan can let slip by. Let the panic begin.

Ghost in the Shell

Ghost in the Shell is an action-packed adventure set in a future world where people are enhanced with technology. Believing she was rescued from near death, Major (Scarlett Johansson) becomes the first of her kind: a human mind inside an artificial body designed to fight the war against cyber-crime. While investigating a dangerous criminal, Major makes a shocking discovery – the corporation that created her lied about her past life in order to control her. Unsure what to believe, Major will stop at nothing to unravel the mystery of her true identity and exact revenge against the corporation she was built to serve.

In a futuristic but familiar world, a high-tech engineer whose memory has been partially erased must use a group of unrelated objects, including a wire, a ticket stub and a bus token as clues to discover the truth about his previous identity, and collect a paycheck he had been awaiting.

Ewan McGregor and Scarlett Johansson lead an all-star cast as residents of an isolated, high-tech compound. But when they discover they’re actually clones, and worth more dead than alive, they stage a daring escape. Battling an unfamiliar environment and an armed team of mercenaries in hot pursuit, they’ll risk their lives and freedom to save those they left behind-and reveal the truth about The Island.

Its name: EVENT HORIZON. The high-tech, pioneering research spacecraft mysteriously vanished, without a trace, on its maiden voyage seven years earlier. But a weak, persistent signal form the long-missing craft prompts a rescue team, headed by the intrepid Captain Miller (Laurence Fishburne), to wing its way through the galaxy on a bold rescue mission. Accompanying Miller is his elite crew and the lost ship’s designer (Sam Neill); their mission is to find and salvage the state-of-the-art interstellar horror.

When mysterious spacecraft touch down across the globe, an elite team – led by expert translator Louise Banks (Academy Award nominee Amy Adams) – races against time to decipher their intent. As tensions mount between fearful governments, Banks discovers the aliens’ true purpose and, to avert global war, takes a chance that could threaten her life, and quite possibly humanity. Oscar nominee Jeremy Renner and Academy Award winner Forest Whitaker co-star.

The classic science fiction novel by H.G. Wells becomes this big-budget adventure starring Guy Pearce as Alexander Hartdegen, a scientist, professor, and inventor in 1895 New York City who believes that time travel is possible. The sudden and unexpected death of his fiancée spurs Alexander to build a time machine, which he hopes to use in an effort to change the past. When he is unable to change the past, Alexander hurls himself more than 800,000 years into the future, seeking answers about the nature of time, but instead encountering a dystopian world where humanity has divided up into two races, the peaceful Eloi and the subterranean Morlocks. Ultimately, Alexander makes a shocking discovery about the true nature of the Eloi and Morlocks and decides that the only way to change the future is to alter the present.

In the war of man against machine, Kyle Reese (Jai Courtney) is sent back to 1984 by resistance leader John Connor (Jason Clarke) to protect his young mother, Sarah Connor (Emilia Clarke). However, this time unexpected events have altered the past and threaten the future for all mankind. Now Reese must join forces with Sarah and her “Guardian” (Arnold Schwarzenegger) to save the world and stop the next evolution of Terminators.

Affiliate Disclosure Disclosure: This post may contain affiliate links, meaning we get a small commission if you make a purchase through our links, at no cost to you. For more information please visit our Disclaimer Page.
SaveSavedRemoved 0